Since movies took over displaying intelligence, we have seen crazy maps and charts attempt to display intelligence and seem “futuristic.” Here, we can see an example of a heat map: 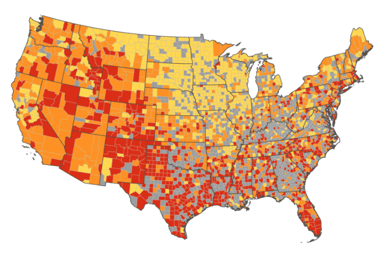 It is great. It is pretty. It paints a picture… but it means absolutely nothing.

This is the critical problem with heat maps. Without the accompanying data and the validity of the data, they are completely useless. As we have talked about in a separate post, we discussed the difference between data and intelligence. When doing any investigation, we need intelligence, which is derived from data. Heat maps do the opposite. Instead of trying to break down data into usable intelligence, it breaks it down into plot points that mean nothing to the investigator.

There are a few issues with what data is being derived and broken down into as a whole. We will look at one of the less thought of ones here. Inside the realm of open source intelligence, publicly available information, or whatever other “cool” acronym of the day is to use, there is not many sources that give you a physical real-world location of users. So the first thing you have to ask is: How are they populating my pretty map if users are not actually saying I am posting this from here? There are a ton of different ways to do this. You could try and derive a location based on other information about the user. You could do some more aggressive intelligence, like using marketing data, tracking data, etc. for tagging them to a location, but is that really under the umbrella of open source anymore?

Other than showing off for investors, heat maps do not really belong in intelligence. They are pretty to look at, but they do not mean anything. It is nice to visualize the data, but if you do not know what is being visualized, or what the visualization represents, you can’t do anything with it. It also brings a plethora of problems with the data you are visualizing. My main message here is: Do not give up precise and accurate data for the sake of visualization. Visualization is nice, but it can only aid the investigation. It is not for replacing actual information and intelligence.