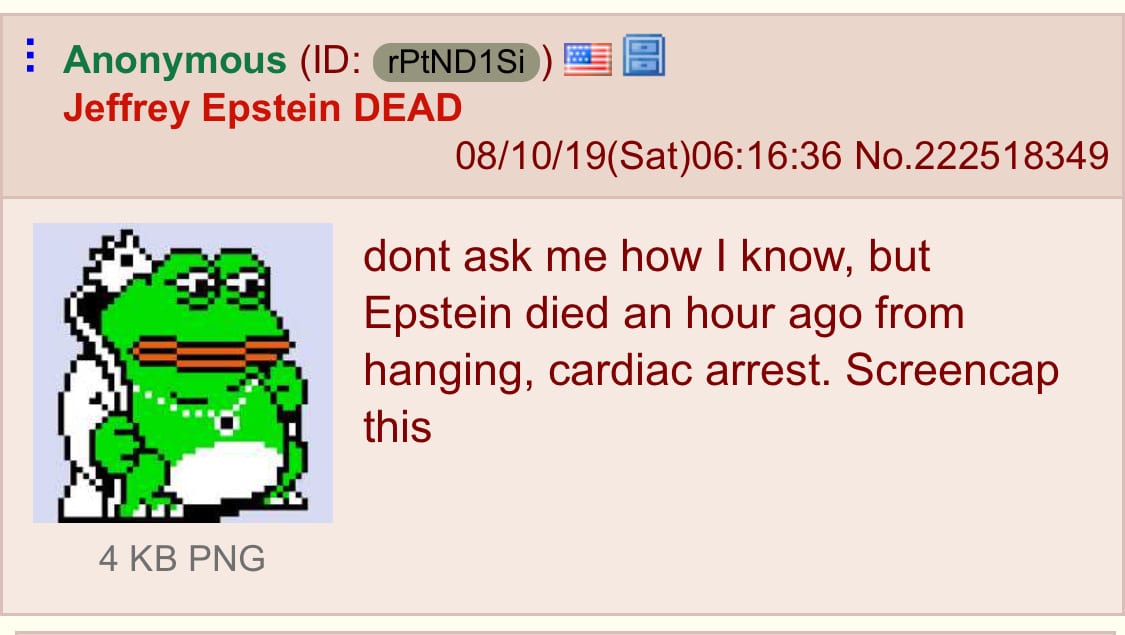 In my last entitled Illuminating Context with Timeline Analysis, I gave a rough sketch of the basics. In this post I will share a few specifics. The primary point to drive home is there won’t ever be an investigation with a timeline.

If you don’t have a timeline (or the discipline), you are not going to be good at investigating the minutia and boring pieces of data in a case.

In this scenario, I am focusing on artifacts that had been mentioned on 4Chan concerning the death of Jeffrey Epstein being discussed before officials announcing his death.

Building the timeline only helps when we fit in other events and only helps us when we want to start asking different questions about a case.

When I start with a timeline or review of events I do the following if I can.

Our first event occurs before Jeffrey Epstein’s death on 08/09/19 at 10:13:24 (Timezone assumed EST). The mandated release of court files in a concerning different players involved in cases relating to Epstein.

The Case 18-2868 was mandated for release and prior to Epstein dying in federal custody.

These documents can be viewed at: https://www.documentcloud.org/documents/6250471-Epstein-Docs.html

Some of the artifacts shared illuminate the 4Chan posts prior to being reported by ABC or New York Post.

Immediate questions we start asking with our timeline:

Regardless of some of the information that is posted on 4Chan, there looks to be 2 posters that had posted to the forum prior to any other media related postings. We observed this approximately one hour after the death and had pushed findings to appropriate personnel on Saturday morning before writing this piece.

The value in artifacts within a timeline cannot be understated. With the timeline in effect, (posted below) we can ask valuable questions while also having a placeholder for other events as they unfold. Some of the items mentioned in our timeline are inferred based on information within the artifacts themselves.

What other questions do you have for this case? Please hit me up on Twitter, after writing this blog post I had also pushed it to twitter in brief form.